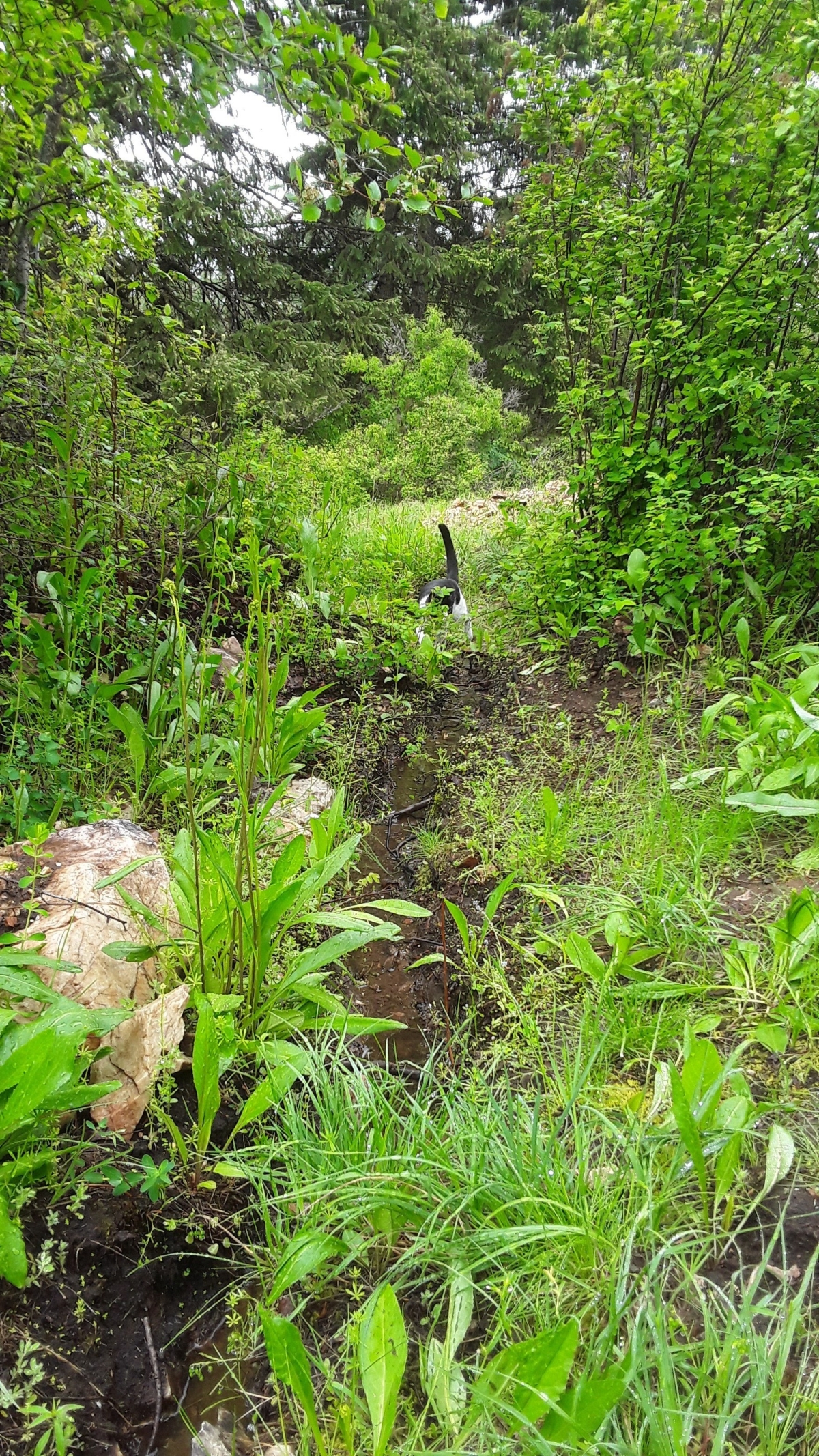 We were lucky to discover natural springs at the top of our property and spent the first year digging the main hole and a trench down the hillside to a place near our trailer. 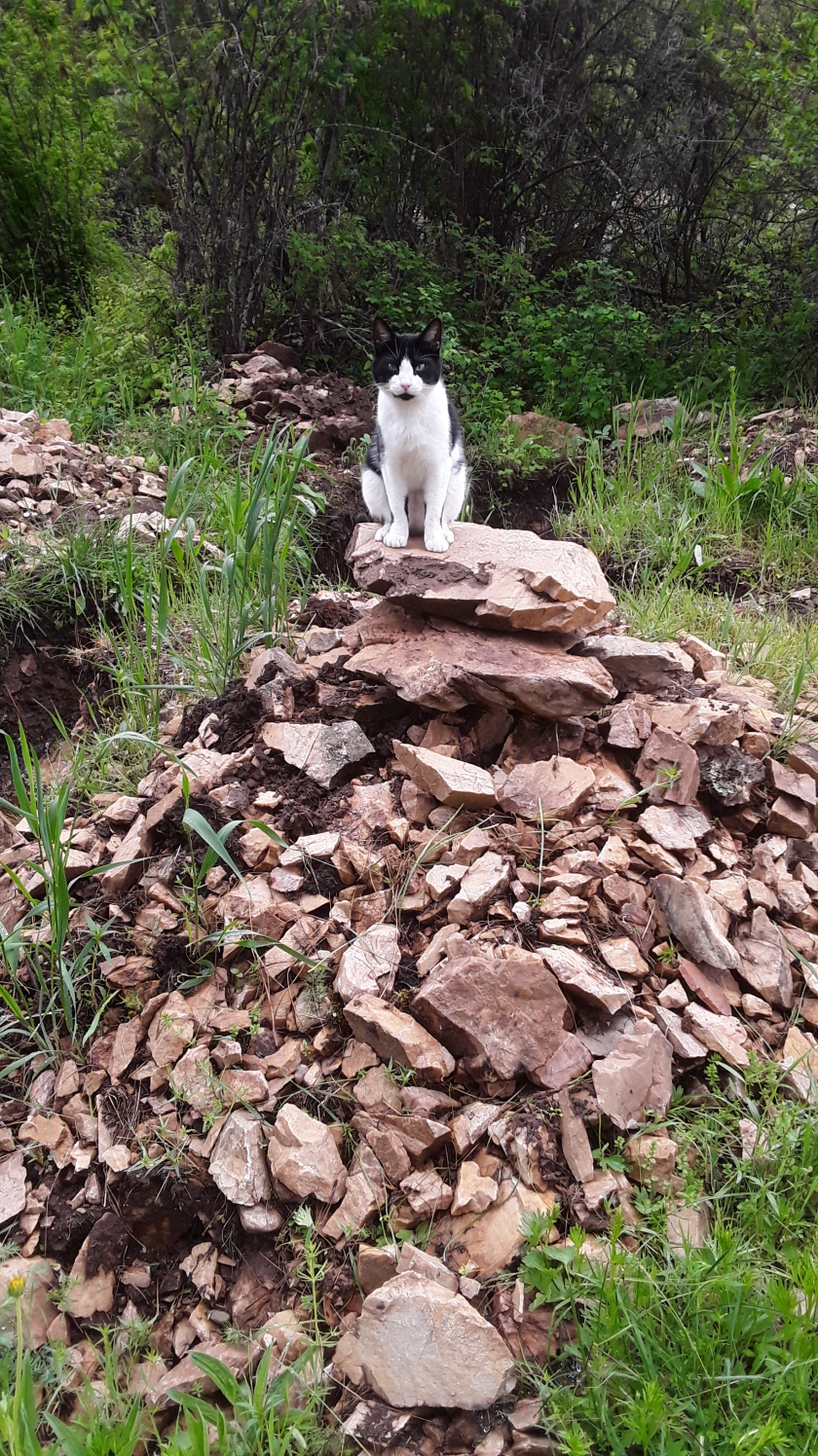 In the process, we moved a lot of mud and rocks. It looked like a bomb had gone off.

Mounds of material littered the ground from the top to the bottom of the area where our spring lay. It was so ugly, I decided to clean it up in order to bring back the natural beauty that was there when we arrived.

I began a restoration.

Surprisingly, it went faster than I anticipated. I raked the rocks into piles and picked up the stragglers by hand and before you know it, the place began to look natural and pretty again.

I started last fall and got about a third of the work done. This spring, I finished but I will leave the rocks in mounds where I hope the plants will begin to grow again eventually.

I can’t wait until next spring to see how it all looks.

When we sold our house on the other side of the state, we had no idea where we would settle down. Personally, I didn’t want to move too far from our old home because of our ties. Friends and family and a fierce resistance to change make me like a limpet: I find a place to stick to and I stick to it.

When my husband and son first pitched the idea of moving, I had a tiny panic attack. We’d lived in our house in Snoqualmie for eleven years and in the surrounding valley for about twenty seven. The idea of leaving it all behind scared the crap out of me. I needed time to digest the idea.

For anyone, moving can be overwhelming because of the logistics alone. The emotional and sociological impacts only quadruple the anxiety. I was looking at selling a perfectly good home and launching into the unknown. My family was my only safety net amidst the potential chaos of change.

Selling a house is stressful enough – packing everything you own (which is more than you think), finding a new place and moving all of your stuff there almost qualifies as a traumatic event. You have to say goodbye to friends and family and schools change. You worry about the effect it’s going to have on your child. Luckily, our son was on board which made things a lot easier in the guilt department.

Not having bought anything yet when we hit the road was an added unknown. We did know we loved the outdoors and wanted something away from the cities; something with trees and acreage.

We spent over three months living in the little travel trailer we’d bought as a temporary home, while we looked for property.  We visited many prospects while we camped and pushed farther and farther east in our search. I didn’t want to move too far away but it became apparent that I might have to compromise.

In August, we decided on a place. We would be situated in Stevens county in eastern Washington about seventy miles south of the Canadian border.  It was beautiful and there were four seasons – unlike the monotonous rain of the Puget Sound region we’d left behind. The property fit our criteria perfectly so we made an offer and waited until things were finalized in mid-September of 2017.

On September 17th, on an especially rainy night near Snoqualmie Pass where we were camping, we packed up and headed home – our new home.

The property we’d settled on was raw land and we knew we would be facing some major challenges to make it livable. Ultimately, reality kicked our asses, especially during our first year but we survived (unlike some of our worldly possessions that succumbed to the forces of nature).

Living off-grid isn’t just living; it’s an experience that involves an interplay between emotions and pure grit. Out here, you interact with your environment and surroundings  because you must. What you do or don’t do directly affects the quality of your life. You learn cause and effect and that’s a good lesson.

When I’m stressed out, the tasks of daily living become burdensome. I’m easily frustrated and ask myself “what was I thinking”, only to wake up the next morning to the sight of trees, mountains, deer and other wildlife bathed in the brilliant light of a sunrise I could never have experienced from the doorstep of my former suburban home.

Being here comes at a price but the cost reminds us we are alive.

We were the last ones to know.

Last week, our new neighbor of one whole month approached me out of the blue and asked me if I wanted to cut down our trees on the edge of our property or have him do it so he could move the cul-de-sac we share thirty-feet over and onto our property.

He was very casual about it – like it was a matter of an overhanging branch that needed to come down or something. It felt more like a shock-and-awe maneuver as this was the first I’d been clued into his plans.

I told him I would need to talk to my husband about the matter and I practically sprinted to the RV with the bad news. My husband was just as floored as me. We felt so blind-sided we couldn’t think straight.

Were we over-reacting or should we be wary of this person?

We scheduled a legal consultation and here’s what happened: Our neighbor had done his own survey and discovered the existing easement road was fifteen feet to the side of where it is shown on the survey so he decided he was going to move it – without consulting with us first.  The road, however, has been in it’s current location for decades and would most likely be considered an implied easement and remain in place.

To add to the confusion, the easement is also described as being the existing road in other parts of the same legal documents which would make it legally in the right spot. The contradiction might warrant another look by the attorneys to be sure.

We were advised that the proposed change would be to our detriment and the neighbor’s benefit. We would be the only ones out of the three property owners who shared the easement road who stood to lose acreage if it was relocated. A judge might take that into consideration if this ever goes to court.

The attorneys told us that it would save everyone a lot of money to negotiate rather than go through litigation. We could even propose a sum for the use of our property as an option.

Armed with this basic real-estate legal knowledge, we’ve decided to just watch and wait and hope the neighbor doesn’t push for this after we leave him a note informing him of our stance.

I could live without a freeway in my front yard.