We are on another prospecting expedition and I’m sitting by a campfire smelling steak burning just right as the sun nears the top of the treeline to the west. It seems as if I feel less heat already in early August. Pink Floyd’s The Wall is playing – probably for the one-billionth time since the album was created. 🙂

There is laughter and talk of entrepreneurial ventures after the virus recedes – hopefully for good until the next Something comes along. I’ve just had a bite of the best Filet Mignon of my life.

Pieces of gold are being compared.  I feel content at this moment. America – the world – mankind is going to be OK. As we sit around the fire, we share stories about the prospecting culture and the local woodcutters among other things. Bits of information are passed back and forth such as that salmon berries are known by some as Smooshberries – because they are smooshie, of course.

Local lifestyles make for great tales. The woodcutters are stuff of legend around these parts. They know how to harvest a truck load of wood from the mountains in the dead of winter (I’m from “civilization” so everything is larger than life compared to what I’m used to).

We’re out prospecting with some people we’ve just met and they are very cool. They own a computer store and the husband has a YouTube channel having to do with drones. They want to open a restaurant. I’m sold after the steak.

Earlier in the evening, the husband threw a fishing line in the river and snagged a couple of trout for dinner. I’m rusty and asked for some pointers then proceeded to snag my hook in the nearest bush then break the line. I briefly considered shooting a trout with my slingshot before grabbing a hotdog. 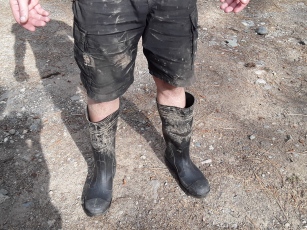 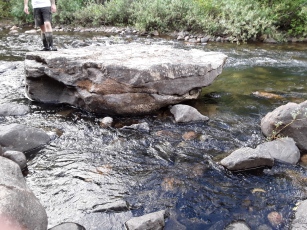 Our other friend’s pooch has taken up residence at my side as I give him a good scratching. His owner is dabbling with constructing campers of a different type for a specific purpose. I don’t want to disclose his ideas without permission so I’ll let that lie for now.

We all have gold in common. It’s fascinating, elusive, and worth almost two grand an ounce right now.

I’ve been focusing on metal detecting for gold ore with some success and we plan to try to track down the source. It’s exciting. I’m sending in a pound of the material for a gold and silver assay which will tell me if, and how much of the minerals are in there.

The evening is mild, the mosquitoes few, the food excellent and the trading of stories and dreams the best. Tonight, the ties that bind are exquisitely charred food, a campfire, stories of people and their dreams – and gold.

Another trip is coming soon. We only have so much time before the legendary winter sets in. Then the gold of the mountains and creeks will be locked up for the season in ice and snow.